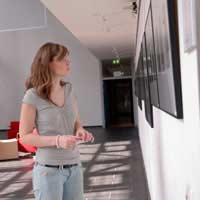 The human eye is capable of perceiving light wavelengths ranging from 400 to 700 nanometers. When light rays within this spectrum falls on our retinas (the light sensitive cells in the back of our eyes), our eyes and our brains interact together in a complex fashion, in order to orchestrate the experience that we perceive as seeing.

The retinal image that light creates when falling on the retina is only the starting point of visual perception. Our internal perception of the external world doesn't reflect only the physical properties of the world around us, but also is influenced to a substantial extent by filtering, transduction and transformation of information within our own nervous system. In short, the brain, and not the eye is the true organ of visual perception.

The sensory input that is constantly bombarding our eyes constitutes a noisy and discontinuous stream. Yet, we perceive an apparently stable and constant environment. Our eyes are exposed to a continuous spectrum of stimuli, known as graded information, but in order to make sense of what we see, our brain has to keep on making executive decisions that are known as binary, meaning yes or no. Something is billowing in the wind just behind a rock. Is it a palm frond or a hungry lion about to spring? The visual signals reaching our brains are often ambiguous, yet in most cases the neural processes underlying visual perception turn these signals into yes or no binary decisions.

Which Parts of the Brain are Involved?

Significantly more of our cerebral cortex is devoted to visual processing than to any other sensory modality. After all, seeing has the huge advantage over the other senses of allowing us to gain information about our environment without the close physical contact that we need for other senses like taste, touch and smell. So seeing has an overriding importance in every aspect of our day to day lives. Different brain areas, as well as different processes of perception are responsible for particular visual functions, like movement, colour and depth perception. There are even specific brain regions that deal only with facial recognition, and others that process only object recognition. Localised brain damage affecting these regions can lead to disorders which seem bizarrely specific, such as prosopagnosia, where the ability to perceive faces is lost, while the ability to perceive other objects is normal.

How Accurate is Our Visual Perception?

Lots of different variables, like changing context and cultural expectations can influence the accuracy of our visual perception, leading to misleading interpretations of images, as seen with visual illusions and ambiguous stimuli. For example, in a well known illusion known as the Hering Illusion two straight lines are in fact parallel. But, the background of intersecting radial lines change our perception and they appear to bend away from each other.

When looking at ambiguous figures our perceived image may appear to switch repeatedly and spontaneously between interpretations. Is it a vase, or is it two faces in profile? Are we looking at the cubes for above or below? Well known examples like these help us to appreciate how much subconscious processing is going into our apparently effortless interpretation of the world around us. This also leads to the question of how our visual apparatus can be fooled by such illusions with apparent ease, yet enable us to successfully negotiate our environment. One theory to explain this is known as the "perception-action model." The idea is that we have two co-existent visual perception systems – one which deals with perception for recognition purposes, and can be fooled by visual illusions, and another which deals with perception for action, and is less prone to error.

The light range that the human eye can perceive gives rise to our psychological impression of the colour spectrum. But other animals can sense a different range of wavelengths. For example, bees can see ultraviolet patterns reflected by flower petals, and use them as visual guides when homing in on nectar. Pigeons can perceive polarized light patterns in the sky which are totally invisible to us, and which are probably partly responsible for their remarkable homing abilities. Birds of prey have tremendous visual acuity, enabling them to swoop down on tiny creatures from considerable distances. The world of visual perception is a very varied one, and we may not even be capable of imagining what other creatures see.