How Does Language Acquisition Happen? 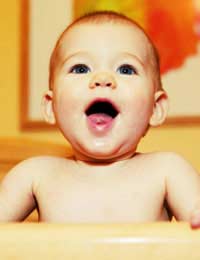 This means that most of our brain develops after birth and is influenced by the environment. Almost all the neurons (nerve cells) in the brain are formed before birth, but until age one there are rapid increases in the overall size of the brain, and of the grey matter, where the synapses needed for higher mental function are found.

A two year old child has 50% more synapses than an adult, and brain metabolic activity peaks at age four. The eccentric manner in which brain development occurs is totally unlike the way that computer programs are developed. The multitude of extra pathways in the child's brain may either be used and therefore reinforced, or may atrophy and disappear due to disuse. That's why synapses wither and metabolic rate slows inexorably as we approach adulthood.

These changes probably correlate with the child's amazing ability to absorb languages, and with the difficulty we have with new languages as we get older. Children's brains also have more plasticity and redundancy than adults’ brains, so they can master both language itself and a perfect accent, and even if brain damage occurs, can relearn far more than an adult would.

Is there a Language Organ?

Is learning a language just one of many problems that our brains solve by general intelligence or is there a specific "mental organ" that is unique to humans and works optimally in children?

Until the 1950s, most scientists believed that the former was the case. Then the famous linguist Noam Chomsky came along and turned the accepted wisdom on its head by proposing the idea of a language organ. He argued that since all children learn languages that are ruled by subtle and abstract principles, without any overt teaching about those principles, our brains must in some way be hard wired for language acquisition, once we are exposed to it, with an innate, species specific module. This scientific approach to language acquisition came about at the same time as the birth of cognitive science, and is the generally accepted approach nowadays.

How Do Children Acquire Language?

Language acquisition is, of course, is the million dollar question. It seems most likely that our brains have some type of hard wired language module, which is genetically programmed. But genes are not all there is. A child of Chinese parents will speak English if he grows up in England. Any child can learn any language if exposed young enough.

Conversely, isolated children with no language exposure do not learn to speak. So environment clearly has as vital a role in language acquisition as genetics does. The fascinating thing is that although children need to hear language to learn it, it seems that they neither need nor benefit from active teaching. Studies have analysed hours of taped interactions between children and parents. They have shown that children learn at the same rate whether their parents correct mistakes or ignore them. It doesn't seem to make any difference. In fact, as any parent knows, even repeated corrections are usually ignored anyway. It doesn't even seem to matter if there is any difference in parental response to correct versus incorrect sentences. Somehow, over those first crucial years the child's brain both absorbs huge amounts of vocabulary and sorts out correct from incorrect language.

We don't really understand how all children become more restrictive in their speech as they age, and conform more and more to the accepted rules, irrespective of formal instruction. But the fact is that they do.

On the other hand, despite this remarkable phenomenon whereby languages retain their grammar at any given point in time, there is also a clear evolution. We don't still talk like they did in Shakespeare's time. In each generation, any alterations in the rules are small, but over time they add up, so languages are almost like living beings, changing over time.

The theory of Universal Grammar suggests that these things happen because the hard wiring that we are all born with acts like a highly adaptable template, allowing children to deduce the structure of whatever native language they are born with from mere exposure.

Fight or Flight: Coping with Danger
Share Your Story, Join the Discussion or Seek Advice..
This is a very one-sided article and only takes a nativist view into account, can be misleading for someone who has no knowledge about this concept. "Studies have analysed hours of taped interactions between children and parents. They have shown that children learn at the same rate whether their parents correct mistakes or ignore them." definitely wrong, some select studies may have found results in this direction, however it has been shown in a huge amount of research that parental influence is inceredibly important and corrective feedback has a great effect on language development
Alex - 21-Jan-17 @ 2:22 PM
Title:
(never shown)
Firstname:
(never shown)
Surname:
(never shown)
Email:
(never shown)
Nickname:
(shown)
Comment:
Validate: