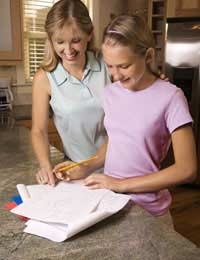 The term "g" is used by researchers to describe "General intelligence". It represents a measure of overall cognitive ability across a diverse variety of tests. It's not the same as IQ but it does tend to correlate. Everyone agrees that "g" tends to run in families. Lots of studies have shown it and most people can see it when they look at their own families, friends and acquaintances. But is this down to genetics or to environmental influences?

Is There a Gene For Intelligence?

Although there have been some suggestions, no single gene has yet been conclusively linked to intelligence. Rather it appears to be a case of complex interactions on many levels between many different genes – something known as polygenic inheritance.

Identical twins have exactly the same genes, while non-identical, or fraternal twins share about half their genes, as do all siblings. Another feature of twins that makes them an ideal choice for studies is that they tend to be raised in pretty much the same environment as each other. If a particular feature is the same in identical twins, but not in fraternal twins, then chances are it's mainly genes that are controlling that feature.

So according to the twin studies it seems that genes play a very important role, but are not the only factor, since if they were, the correlation between identical twins would be 1.

Identical twins reared apart are almost as similar in "g" scores as those reared together. Adopted children and their adoptive parents have a "g" correlation of zero, while adopted children and their biological parents tend to have the same correlations as any parent –child pair. So although genes don't seem to be the only thing affecting intelligence, their effects do seem to be constant and apparently not overridden by environment. Disappointingly, parenting doesn't seem to have much effect.

Does Heritability of Intelligence Alter Over a Lifetime?

Remarkably, it appears that it does. "g" heritability climbs gradually from 20% in babies to 40% in children, peaking at 60% in adults. Why this should be is still a matter of speculation. It's been suggested that as our cognitive abilities become more complex, new genes may come into play that were not needed when brain function were less sophisticated. Or individuals may be drawn towards environments that fit with their genetic makeup, as time goes by and genetic effects that started out small in childhood build up together during adulthood.

Inherited Features Inside the Brain

The volume of grey matter is seen as a measure of the density of the brain cells, and reflects cognitive performance. So the more grey matter you've got, the brainier you are. Remarkably, grey matter volume is strongly determined by genes, and found to be most similar in people who are genetically alike. The frontal cortex (critical for most conscious thought) and the language related areas also tend to be very similar in family members.

Researchers have used the data from brain scanning studies to create colour coded images to demonstrate which parts of the brain are influenced mainly by genetic make-up and which are more adaptable to environmental cues, like stress and learning.

Brain regions where genetic influences are paramount may be particularly vulnerable to diseases that run in families, like dementia and some types of psychosis. New genetic brain mapping approaches have been suggested as a means of screening family members of patients for early signs of brain changes that may herald diseases like Alzheimer's or schizophrenia. When risk genes are known, these techniques may also help scientists to understand how they relate to inherited brain disorders.

On a darker note, there are those that worry that the new research findings that so clearly relate intelligence to inheritance may lead to thorny ethical issues and to racism disguised as "eugenics" – the idea that the human race can be controlled by selective breeding. Indeed, one of the founders of the Eugenics Society in the UK was Francis Galton, a pioneer of early intelligence testing. It is to be hoped that the current scientists and psychologists working in the field have a greater ability to see the full picture and to understand its complexity. As with so many other aspects of cognitive neuroscience, our knowledge at present is only observational, and is nowhere close to any type of practical application.

Mother's Milk Gives Kids a Higher IQ
Share Your Story, Join the Discussion or Seek Advice..
[Add a Comment]
Peter, your comment is a sign of being not intelligent. Otherwise by that logic we'd all have black skin...Two words, GENETIC MUTATIONS, go and read about science my friend before fabricating unintentionally!
Abraham - 3-Dec-15 @ 10:44 PM
People are just looking for excuses to blame their laziness on their genes which may play a part but they should not stop working hard and challenging yourself, everyone has potential its just about reaching it by ones effort!
whsmith - 6-Feb-15 @ 1:46 PM
What an absurd and completely unfounded comment to make. The very fact, as you mention, that people are able to 'adapt and absorb' information better than others is clear evidence that people are born with varying levels of 'intelligence'. Indeed, if everyone was born with the same intelligence how would people be able to absorb such information better than others? Our intelligence is clearly influenced by our environment; it is the stimulation of these abilities that enable them to prosper. Yet, there is an innate ability that allows certain individuals to be better at certain activities, notwithstanding the amount of practice that one does of that activity. For instance, it would be absurd to suggest that if everyone practiced as much as David Beckham then they would play football to the same standard as he does.
jsmith123 - 8-Feb-12 @ 3:37 AM
Intelligence is not inherited and most importantly it cannot be inherited and here is my argument... If intelligence was inherited then we all would be intelligence since in the tree of life we all came from the same origins. I'm no scientist but it seems clear to me, from my own observation that our intelligence is directly affected by the environment we live in. And after all the ability to adapt and absorb information from the environment is sign of intelligence in its highest form.
Peter - 15-Jun-11 @ 8:13 PM
Title:
(never shown)
Firstname:
(never shown)
Surname:
(never shown)
Email:
(never shown)
Nickname:
(shown)
Comment:
Validate: