Is Language a Purely Human Trait? 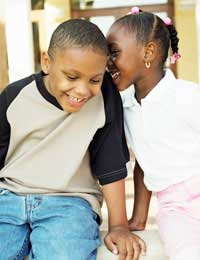 Although other animals can communicate, sometimes even at quite a sophisticated level, humans are the only species that actually speak. Every normal human child successfully learns a first language within a few years and without any formal lessons. This uniquely human trait is quite astounding, given the extraordinary complexity of language.

The process by which humans develop language skills is known as language acquisition and is a central topic in cognitive science, which every cognitive theory tries to explain.

Language development in children is referred to as first language acquisition, though in the case of bilingual children, two or more languages may be acquired in childhood, as first languages, with complete fluency, and the process whereby this happens is a fascinating one.

Is Language Unique to Humans?

According to most modern scientists, language is unique to humans. It seems that the human mind and body have evolved in such a way that we are specially adapted for language in a way that has no parallels in the animal kingdom. The way our vocal tracts are physically constructed allows us to produce a wide range of sounds for speech, even at the expense of optimal efficiency for breathing, swallowing and chewing. Death by choking on food commonly led to accidental death before the Heimlich manoeuvre was invented. So, according to evolutionary theory, the benefits of speech must have been great to outweigh such a selective disadvantage in the course of evolution.

Other animals use communication, but it tends to be with a fixed repertoire of symbols, which is not analogous to the unlimited set of combinations of symbols that all human languages involve.

Researchers have tried to teach sign language to chimps, working on the theory that we are closely related to them by evolution, so they may have some kind of pre-linguistic abilities. But these animals need a huge amount of regimented teaching, based on the intent of requesting food or tickling, and they only ever master communication with a relatively small number of signs.

By contrast, every normal child picks up thousands of words quite spontaneously, and learns the syntax required to combine them and communicate for a wide variety of purposes including totally abstract concepts. At the period of "language explosion", usually some time around ages 2-3, children acquire up to 40 new words of speech per day. All this occurs without any formal teaching, and across the broad spectrum of human societies, so it seems that this ability to learn language is something that only humans possess.

Is Language Part of General Intelligence?

The left hemisphere of the human brain, around the areas known as the sylvian fissure, deals with language. The neuronal mechanisms involved in language seem to be quite distinct from those involved in general intelligence. Strokes affecting the language areas can lead adults to lose most of their linguistic faculties, even though nonverbal IQ tests show that other types of intelligence are unchanged.

In a rare type of inherited disorder, known as Specific Language Impairment, both speech and understanding of language are poor throughout the lives of affected individuals, though all other areas of cognition are absolutely normal.

The opposite occurs in other childhood syndromes like spina bifida or Williams syndrome where individuals may have severe mental retardation yet fluent, articulate language skills.

Even more bizarrely, certain small regions of the human brain seem to correspond precisely to specific aspects of language. For example, very localised stroke damage to one small area of the left hemisphere has been known to lead to isolated inability to name the fingers, while all other faculties remain intact.

So although there's still a lot that we don't know about how our brains deal with language, it is generally accepted that this quintessentially human trait seems to be handled by the brain in a unique fashion.