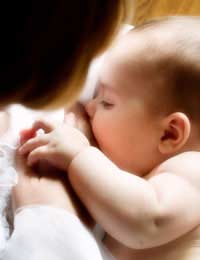 We have all heard that a mother's milk is best because it is a wonderful, nutritional food that gives babies what they need during those important early months and year. But did you know that mother's milk has also been linked to a higher IQ later down the line?

A recent study found that when mothers breastfed their babies exclusively and for a longer period of time, their children had a cognitive advantage compared to babies who were fed formula milk. In fact, their IQ was higher by three to four points overall and their performance academically was also raised.

Older studies had found that brain development was enhanced by breastfeeding, but this is the first study that properly quantified this benefit. The study was also designed with a larger size that ruled out some of the other factors as responsible for the increased IQ and boosted academic performance.

Approximately fourteen thousand children were evaluated in this particular study in more than thirty different hospitals and clinics. The kids were followed until they were nearly seven years old.

Once the children were at the age of six, the ones in the breastfeeding group had higher IQ scores. The testing assessed different kinds of intelligence such as verbal and non-verbal intelligence as well as their intelligence overall.

Another important result was that the children who were breastfed had a better overall performance academically compared to the ones who were fed formula. In the study, paediatricians did the cognitive assessments of the children. Teachers performed other assessments for areas such as reading and writing.

Worries About the Study

While the study is an important one in terms of encouraging women to breastfeed, it shouldn't cause a panic for women who have legitimate reasons for using formula rather than breastfeeding.

It's simply useful to be aware of the benefits of breastfeeding and to make decisions based on current research while also keeping in mind a mother's health and ability to breastfeed. All of these factors must be weighed when making the right decision about whether to use formula or breastfeed.

Researchers also considered that the physical contact between mother and child could have contributed to the positive results for the breastfeeding group rather than the milk itself. However, they do believe that the constituents of breast milk, which are known to be beneficial to health, did play some part.

For now, the "breast milk is best" motto seems to prevail but your unique circumstances and health as a mother should also be taken into account. This way, you can make the best decision for how to feed your baby and give him or her the best chance at a healthy and successful life.