Left and Right Brain Working Together 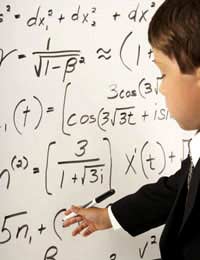 The theoretical barriers have dissolved in the last two decades and cognitive neuroscientists now study how the neural hardware runs the mental software. It's an exciting, but very new field and so far, the findings are mainly theoretical rather than practical. Basically they show that it makes no scientific sense to map gross, unanalysed behaviours and skills, like arithmetic, reading, spatial reasoning or visual imagery, onto one brain hemisphere or another.

"Both Hemispheres Are Involved"

Any task, however simple, that our brain performs, can usually be broken down to a number of components. These components are often dealt with in separate parts of the brain, although to us it feels like a single thought process. For example, a simple number task, expressed in two ways that seem, at first glance, to be similar: What is bigger, three or six? What is bigger, 3 or 6?

In order to respond to the first question, we have to both recognise number names and compare the numerical values that they represent. In the second question, our brain has to identify and interpret the Arabic numeral symbols before comparing the values. Brain-recording techniques have shown that a system in the left hemisphere identifies number words, but both the left and right hemispheres are used when we identify Arabic numerals. After we've worked out the numerical quantities, then yet another neural subsystem in the right hemisphere compare the number magnitudes.

This example illustrated how the simplistic view of left brain for numbers and maths does not begin to address the true complexity with which the brain splits up every task.

Visual imagery is another example. In the popular perspective, it's a right brain function. But fascinating experiments have shown that specific areas in both left and right brain are in fact crucial. Brain imaging studies of normal adults have shown activity in both hemispheres.

In studies of split-brain patients (who have had the connections between right and left hemispheres severed to treat epilepsy), a lower case letter was presented to each hemisphere in turn, then the patient was asked whether the corresponding capital letter had any curved lines. In order to answer, you have to come up with a visual image of the capital letter, based on the letter you've seen. The left hemispheres performed perfectly, while the right hemispheres made mistakes.

Patients with damage to the rear part of the left hemisphere have long term visual memories, but can't use them to generate mental images. So they're stumped by requests like "Think of a cat. What colour is it?", although they can recognise a picture of a cat and draw or describe one if it's in front of them easily enough.

So overall, it seems quite clear that the task of visual imagery is complex and its components are not all confined to the right hemisphere, as the popular conception would claim.

The reason why it's important to dispel misconceptions about the left brain versus right brain question is that those misconceptions have been wrongly used to justify a lot of theories about educational reform. It is often suggested that cognitive science supports the contention that our educational system is geared only to the rational, analytical left brain, at the expense of the creative, visual, imaginative right brain and that pupils are therefore not encouraged to "see the whole picture" and to use their brains as an integrated whole. Although these assertions may be true, they are not based on any evidence from cognitive neuroscience. Instead, it shows us a lot of fascinating facts about how our brains work, but gives us no real practical clues about how to use those facts in an educational setting.

Cognitive scientists tend to agree that new educational practices should only be evaluated on the basis of the impact they have on student learning, since as yet, brain science, though fascinating, has contributed no evidence for or against brain based learning strategies.

Fight or Flight: Coping with Danger
Share Your Story, Join the Discussion or Seek Advice..
Thank you for this! Great!! Just Great!!!
Bob Dylan - 18-Feb-15 @ 1:13 PM
that is great but it is need to be shown some references and stations for this article because it is very crucial and i met a lot of people claiming that both brain hemisphers cannot work at the same time in a single task or a single thought.
mika - 1-May-13 @ 8:39 PM
Title:
(never shown)
Firstname:
(never shown)
Surname:
(never shown)
Email:
(never shown)
Nickname:
(shown)
Comment:
Validate: