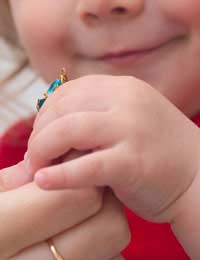 Newborn infants can move their arms, legs, hands and feet around, mainly in a reflexive manner with little conscious control over starting or stopping. Children need to acquire a vast array of motor skills as they learn to sit up, walk, run, feed and dress themselves, draw and write.

Most adults go on to acquire a variety of elaborate movement sequences including those that enable them to drive cars, dance, play tennis, swim and operate a computer keyboard and mouse. Exceptional individuals can perform brain surgery, fly aeroplanes, paint masterpieces and play symphony piano music. The amazing thing is that the brains of the flailing babies possess the raw material that will allow the learning of tasks of such tremendous complexity.

How Do We Learn?

Children progress in their acquisition of both gross and fine motor skills as a result of a combination of brain maturation and muscle development. These things happen in a fairly orderly sequence in most children. Major gross motor skill milestones include sitting, crawling and walking, while fine motor milestones include grasping, pincer grip (holding objects between thumb and forefinger) and writing. These abilities and many more are all acquired gradually and implicitly through continuous interaction with the environment. This is known as skill learning and the motor milestones of childhood development are thought to be hard wired into all of us, as long as we get enough freedom to practice.

Older children and adults also continue to learn skills like riding a bicycle, driving a car, knitting or dancing the tango. Skill learning is thought to be a multiple step process that includes fast learning and slow learning. In the first step, the person practices the task and performance improves gradually. After training has ended, if performance is retested days or weeks later, there is usually significant improvement. This is known as the slow component of learning, whereby the brain has consolidated the skill.

Scientists have studied motor learning for motor skills ranging from simple finger tapping tasks to complex manipulation of a complicated robotic arm. For all such tasks, results show that the greatest gain in performance is observed after a good night's sleep. Skills are enhanced and errors are reduced. There isn't yet a clear answer about which type of sleep is the most critical – some say it's the REM (rapid eye movement) stage, while others think that the stage 2 non REM sleep that occurs in the last 2 hours of a good 8 hour kip is the most critical. But they all agree that 40 winks is the best possible way to optimise the slow component of motor skill learning.

What's Happening Inside the Brain?

When we master a new motor skill, we go from active effort to automatic ability. Learning to ride a bike is a good example. It's also the paradigm of a skill that we retain for life, hard wired into the brain. This is known as implicit or procedural memory. It seems that as a motor skill enters our implicit memory, the neural pathways responsible for performing the task shift from one brain region to another.

For example, in one experiment magnetic pulses were used to trigger neuron firing in the motor cortex, in order to study neuronal activation during finger skill learning. During the practice time, while the subjects were learning the skill, the region of neurons recruited got bigger and intensity of firing increased. But once the skill was mastered, the region shrank back again. Apparently a different region of the brain, probably the basal ganglia or cerebellum took over once the task became automatic. Many athletes believe that as well as practice to hone motor skills, we can improve simply by imagining the movement over and over again. This visualising may be analogous to what our brain does during sleep, as neuronal pathways needed for the movement are consolidated.

If they could "read" the firing patterns of the neurons that control arms and legs, then some scientists suggest that they could harness the tremendous power of our brains to learn an entirely new class of "virtual" motor skill. In one study, a monkey's arm was restrained and it was trained to control the movements of a ball by attempting to make movements and triggering commands in monitored brain cells. The signals from the monitored cells drove the position of the ball in a 3D virtual reality display that the monkey could see.

If such a system could be made portable and adapted for humans, at some time in the future, technology like this could enable amputees to learn how to control artificial limbs by the power of thought alone.