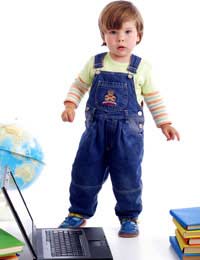 Babies' brains are big business. Advances in basic neuroscience have led to increased understanding of how our brains grow and develop. Yet controversy arises over ideas about the practical implications. There is an abundance of claims that particular toys CDs, DVDs and educational systems have been "proven" to enhance children's brain development.

There have been suggestions that classrooms should be painted in pastel colours because brain based research indicated that children learn better in a pastel environment. But the scientists tend to remain skeptical about such leaps from the laboratory to educational practice. In some cases, myths about brain development arise through journalistic misunderstandings that end up entering the public consciousness, in others the myths are reinforced through persuasive advertising. There are big bucks to be made when parents can be convinced that a certain gadget or toy can make their child cleverer!

There used to be a concept that newborn babies aren't capable of interacting right away, and that it takes while to learn to see and hear. But nowadays we know that this just isn't true. Babies are learning even in uterus, and benefit from interactions from birth onwards. They can see at birth, and it used to be thought that newborns could only focus on objects 7-10 inches away, but in fact this isn't the case. They are able to focus at any distance, but at first without good control over the eye muscles needed. It takes about 2 months for this control to develop. High contrast black and white toys are often claimed to stimulate vision. But in fact newborns and young infants can distinguish even quite subtle shades of grey and research shows that infants as young as 2 weeks can see colours and distinguish a red object from a green one.

This is a perfect example of how basic research results can get distorted in the public consciousness. In 1992, research at the University of California showed that when college students listened to Mozart for 20-30 minutes just before an exam, their results were a bit better than average on certain types of spatial problem solving tasks. This fits with other evidence that suggests that when particular brain areas are primed, people can perform certain tasks a little bit better for a short time. As far as the science goes, that's all that's ever been shown. There was no evidence of long term IQ increases and no studies have ever shown any evidence of similar effects in babies. But the media grossly exaggerated the findings, as did some perceptive companies who could see the commercial possibilities, and now there is a widespread public perception that it has been scientifically proven that classical music will make your baby cleverer. Titles like Sony's "Build Your Baby's Brain" series of classical CDs certainly attempt to give that impression.

Some parents make the mistake of thinking that a child with a bigger head must have a bigger brain, and therefore be cleverer. Some years ago, a theory arose that children's ability to learn could be determined by growth in skull circumference. The idea was that if the skull isn't growing, then the brain also isn't growing, and the child can't learn. Of course, the whole theory was absolute rubbish, as brain size bears no relation to intelligence. The critical thing is the number and quality of interconnections between neurons.

Does the Brain Grow Steadily?

Children's brains seem to develop in clear spurts, continuing until young adulthood. Optimal performance at particular skills occurs at ages 3 1/2 - 4 1/2, 6-7, 10-12, 14-16, 19-21 and 24 -26. There seem to be physical brain growth spurts at similar ages. Brain activity actually gets less from age 3 onwards, as adult brains are more efficient, having got rid of excess connections by a process called pruning. Although children's brains are far more efficient than adults at learning certain skills, like new languages, claims that these skills cannot be acquired later are in fact untrue. It's much harder, and requires more effort to learn a new language once you've missed the prime sensitive period, but it can be done, as even adult brains are actually pretty adaptable.

Do Children Need Special Toys to Develop Their Brains?

Of course, the toy makers would have us believe that this is the case, and that your child will be top of the nursery school class if you fork out for whatever their payroll "brain development experts" claim is best. But in fact the neuroscience evidence all shows that there aren't any special tricks for enhancing the natural wiring phase in childhood brain development. The thing most likely to cause children to thrive is loving and responsive care and parental attention.