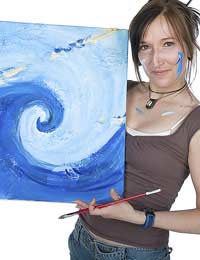 In 1981 the Nobel laureate Roger Sperry pioneered the study of "split-brain" patients and discovered some astounding things about how our brains work.

"Split-brain" patients are people who have had the two hemispheres (halves) of their brain surgically disconnected to treat severe epilepsy. Since the left hand and eye supply sensory data to the right brain and the right hand and eye supply the left brain, in these "split-brain" patients, tests can be conducted where each half of the brain is effectively isolated from the other.

From these groundbreaking beginnings, lots more studies have filled in a fascinating picture of how different regions in the two separate halves of our brain fulfill very specific roles and how normal connections between the regions is vital for fully integrated human functioning.

The functional map of the brain that experiments have built up seems to be consistent for about 70-95% of us.

How Are We Wired?

Our brains, just like everything else in the human body, consist of two halves. A big fold down the middle divides the brain into separate left and right sides, with the only connection being a thick nerve cable, called the corpus callosum. The whole left side of our body is "wired" into the right brain and vice versa. That means that all the sensory input from the left body is entered into the right brain, and the right brain controls all the motor output of the left body.

The whole concept of a left brain –right brain dichotomy of function has captured public imagination for years and has led to a lot of "pop science" misconceptions.

The standard line in these oversimplifications is that the left hemisphere is the logical side, dealing with speech, reading, writing, details, facts, maths and science and rational, literal, practical analysis.

In the meantime, the right hemisphere is portrayed as dealing with the intuitive, creative side of life, with spatial perception, symbols and images, face recognition, imagination, beliefs and fantasy.

Extrapolating from this, claims are made that people are either "left brain" or "right brain" types, depending on whether they are analytical and orderly (left) or creative dreamers (right). There is also a view that our educational system and science in general, tend to neglect the non-verbal, "right brain" form of intellect. Methods have even been devised to supposedly shut off the left brain by mantra meditation or sensory deprivation environments. The idea is that the logical left brain, bored by the lack of input, switches off, allowing the right brain to dominate. Creative writing courses sometimes use these techniques to fight writer's block and try to get the creative juices flowing.

But as is often the case with popular and appealing misconceptions about science, the real evidence that has been gleaned by cognitive neuroscientists, is far more complex and less clear cut. The techniques for enhancing creativity may well help, but there's just no evidence that this is achieved by overcoming left brain-right brain conflict, or that such conflict has any basis in fact, rather than journalistic fiction.